An official court of inquiry will investigate the killing of several Afghan civilians. A Marines special operations company is accused of this accident. 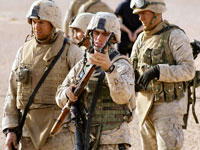 The step is a preliminary one and no charges have been filed against the Marines involved in the March 4 shooting. Conflicting reports have put the number of dead at anywhere between 10 and 19, with several dozen also injured. Among those killed were a 1-year-old boy and a 4-year-old girl.

Afghanistan's Independent Human Rights Commission said the shooting occurred along a 10-mile (16-kilometer) stretch of road after a minivan laden with explosives rammed a military convoy in Nangahar province.

Injured Afghans said the Marines - part of the 2nd Marine Special Operations Battalion - fired indiscriminately at pedestrians and civilian cars as they sped away. Eight members of the company were brought back to Camp Lejeune while the rest of the company was ordered out of Afghanistan while military officials investigated the incident.

Lt. Gen. James Mattis, the top Marine officer in the U.S. Central Command, ordered the inquiry after reviewing evidence that has been collected so far, the Corps said in a statement.

Mattis will decide whether charges should be filed after receiving a report from the court, which will include at least three senior officers with combat experience. No date for the inquiry has been set.

Mattis has also been overseeing the case of a group of Marines accused of the 2005 killing 24 Iraqi civilians in Haditha, Iraq - an incident that prompted the largest criminal probe to come out of the Iraq war. Charges have been dismissed or dropped against several of the Marines accused.

"He could look at it and say, fine, nothing was done," said Scott Silliman, a law professor at Duke University and former Air Force attorney. "He doesn't have to prefer charges. This is the commander wanting to get information. It's a fact gathering body."

Silliman said the court of inquiry is "not something that is done all the time." In a lesser case, the general or other commanding officer would receive a report, review it and make a decision on whether charges are necessary.

In May, a U.S. commander in Afghanistan said he was "deeply ashamed" by the killings and said the military has made condolence payments to about $2,000 (€1,413) for each death.

"We are filled with grief and sadness at the death of any Afghan, but the death and wounding of innocent Afghans at the hand of Americans is a stain on our honor and on the memory of the many Americans who have died defending Afghanistan and the Afghan people," Col. John Nicholson, a brigade commander in the Army's 10th Mountain Division, said in a statement.