Indigence brought Thobela Booi in mining town Welkom. He was killed 1,500 meters (5,000 feet) underground by the fumes of a raging fire. He left wife and child. 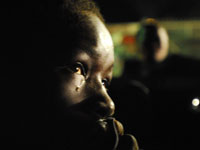 Booi, 30, had been one of hundreds of desperate laborers who risk their lives working in the shadows of legal mining operations, sneaking in through abandoned or poorly secured shafts and making their way through a warren of interconnecting tunnels to the ore.

South Africa is the world's largest producer of gold and as the bullion price has risen - and legal mines dig ever deeper to meet the world's voracious demand - so have the risks these "gold pirates" are prepared to incur in pursuit of the precious metal.

The gold poaching does not only endanger the pirates - known here as "zama-zamas." Haphazard digging - the miners often lack technical skills - can destabilize the shafts, putting thousands of legal miners' lives at risk.

The pirates can spend weeks, even months underground, with food, drink and even post ferried to them by runners.

Clandestine mining reportedly produces about rand 2 billion (US$250 million) of gold a year _ but the gold pirates see little of that money. The workers are believed to be recruited by organized crime rackets that ship most of the gold to Switzerland.

The miners, often armed with guns and homemade grenades, have been known to smoke underground and use gas stoves, even in the presence of highly flammable methane gas.

Booi had been missing for six weeks before he was found. His body was one of 25 brought to the surface at No. 8 Shaft at the St. Helena Gold Mine, outside Welkom, one of the centers of South Africa's gold mining industry.

The bodies were removed by police from one of the mine's underground stations three weeks ago. It is believed the miners died from toxic fumes or got caught in a fire that erupted Sept. 18 and blazed for days at a disused section of the mine, 8 kilometers (5 miles) from the bodies.

They had been left by their colleagues, who made an anonymous phone call to mine security telling them where to find the bodies. Some had stickers giving their names and hometowns.

Booi didn't have a sticker. His brother had to identify him among the other decomposing bodies.

"I want to know how this happened," said the brother, Siyabulela Tenge, dazed and angry after seeing Booi's corpse at the Welkom state mortuary. "How did he go underground?"

Tenge has worked for the Harmony Gold Mining Company, which runs St. Helena. He has been underground and knows the hot and dangerous conditions. He says his brother was ill-prepared for the work.

"My brother wasn't a miner," he said.

There are several police and mine industry initiatives to tighten security and clamp down on illegal mining. In late September, Welkom police arrested 120 illegal gold miners as they surfaced, probably fleeing the underground fire.

The pirates mine the ore then extract gold using dangerous mercury, often while still underground or in illegal processing plants hidden in sprawling hostels.

While the number of illegal miners underground at any one time is hard to verify, anecdotal accounts put it as high as 1,000.

The municipality-owned G Hostel, a wasteland of bungalows and sewerage on the outskirts of Welkom, is notorious. It is from there that it is believed miners are recruited for illegal operations.

A day after police raided the hostel, reporters were shown the remnants of the crude processes taking place there - blackened zinc sheets and tin containers in which mercury is burned.

A collection of plastic buckets stood out amid the filth, some with freshly washed silt coating the bottom - in them a glitter of gold dust.

One miner, who would not give his name, described the hell at the heart of the gold pit.

"Sometimes in the mine it is difficult to identify who is working next to you. It's so dark."