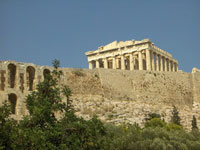 The real nail-biting will be on Sunday, when cranes begin shifting the first of the antiquities - which are insured for  EUR 400 million (US$566 million) - from the ancient citadel to the new museum some 400 meters (yards) away, an operation expected to take up to three months.

"The trial run was a success," Culture Minister Michalis Liapis said. "We are now just one step away from moving the artifacts from the old to the new Acropolis Museum. ... This will be a historic event of major national importance."

In Thursday's trial, officials practiced by moving a 3-ton block of unworked marble from nearby Mount Pendeli, where quarries provided the material for the sculptures of ancient Parthenon.

Three 50-meter-tall (170-foot-tall) cranes slowly moved the light blue crate off the Acropolis, past the fifth century B.C. Theater of Dionysos and into the top floor of the glass and concrete museum. The meticulously choreographed operation took 2Ѕ hours.

"It all went well," said supervising engineer Costas Zambas. "If we had put a cup of coffee on top of the crate, not a drop would have been spilled."

On Sunday, Zambas' team will move a 2.3-ton marble block from the Parthenon frieze, a 2,500-year-old sculpted strip depicting a religious procession that ran around the ancient temple just below roof level.

Wearing padded harnesses, sculptures weighing up to 2.5 tons and mostly dating from the sixth and fifth centuries B.C. will be packed in styrofoam-filled boxes made of plywood and metal.

Up to four crates will make the trip each day, with the whole transfer taking a minimum six weeks. Bad weather could delay the operation, but lofficials say it definitely will be completed by early January, when the lease for the cranes expires.

"In three months from now, the new museum will host ... the Acropolis masterpieces, which will be moved for the first time in 2,500 years - at least the first time legally," he said, referring to the removal of large sections of the Parthenon by Scottish diplomat Lord Elgin 200 years ago, when Greece was still an unwilling subject of the Ottoman Empire.

Elgin's finds are now displayed in the British Museum in London, which has rejected repeated Greek requests for their return.

The display in the new, ultramodern Acropolis Museum - designed by U.S.-based architect Bernard Tschumi in collaboration with Greece's Michalis Photiadis - will have space for the Elgin Collection, should British Museum officials change their minds.

The new museum, which cost EUR 129 million (US$182 million) and is close to completion, is expected to officially open in late 2008, although officials say some sections will be accessible while the displays are still being prepared.

"We believe the public should not be excluded from the most fascinating part of the museum's life, which is when (the display) is being set up," museum director Dimitris Pantermalis said.

The old museum on the citadel, built in the late 19th century, probably will be used for exhibitions on the Acropolis conservation program, the history of excavations on the site as well as drawings of the monuments by foreign travelers from the late Middle Ages onwards.