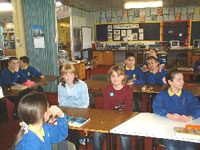 A terrible accident happened outside an Amsterdam school on Thursday. A 14-year-old Dutch stabbed to death his 16-year-old fellow student. He was arrested on suspicion in the slaying.

The victim was rushed to a hospital but died shortly after arriving, police said in a statement.

Detectives were investigating the background and motive of the stabbing while forensic experts combed the street where it happened for clues.

The stabbing followed an argument outside the Technical College in western Amsterdam.

Slayings in and around schools are rare in the Netherlands and very few have metal detectors to screen students for weapons.

Police did not release the identities of the dead student or the suspect. No further details were immediately available.