Robert Kocharian, Armenian President, approved the decision of U.S. lawmakers to recognise the extermination of hundreds of thousanfs of Armenians during WWI as genocide. 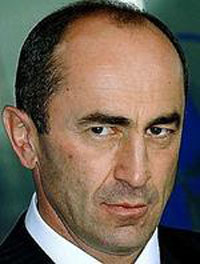 "We hope this process will lead to a full recognition by the United States of America of the fact of the Armenian genocide," Kocharian told reporters after talks with EU foreign policy chief Javier Solana.

Kocharian, Armenian President, appealed to Turkey to join Armenia in talks to restore bilateral relations, but said Ankara had no right to bully other countries into refraining from recognizing the killings as genocide.

"The fact that Turkey has adopted a position of denial of the genocide doesn't mean it can bind other states to deny historic truths as well," he added.

Solana urged Armenia and Turkey to "look to the future" and work to build bilateral ties.

Kocharian said the passing of a resolution by the U.S. Congress would have no impact on diplomatic ties between his country and its neighbor, Turkey - which are nonexistent - but said he was open to talks with Turkey.

"We are ready for diplomatic relations without any preconditions and we are ready to start a very wide dialogue with our Turkish partners on all possible issues of Armenian-Turkish relations," he said.

The U.S. House Foreign Affairs Committee voted Wednesday to pass a measure calling the killings of Armenians early in the last century a genocide, despite objections from U.S. President George W. Bush and Turkey, a NATO ally that has provided support to Washington in Iraq.

The dispute involves the killing of up to 1.5 million Armenians by Ottoman Turks around the time of World War I, an event viewed by genocide scholars as the first genocide of the 20th century. Turkey denies that the deaths constituted a genocide, saying the toll has been inflated and insisting that those killed were victims of civil war and unrest.

France voted last year to make it a crime to deny the killings were genocide, after which the Turkish government ended its military ties with that country.