A case of deadly bombing synagogue in central Paris has gone unsolved for 27 years, but French police are on the trail of a suspect. 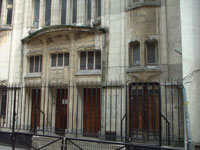 A bomb in the saddlebag of a motorbike killed four people and wounded nine on Oct. 3, 1980, at the synagogue on Rue Copernic in central Paris. The case has remained open since then.

Investigators working off a recent lead believe the suspected bomber is a 55-year-old Lebanese-Canadian of Palestinian origin who spent time after the attack in the United States before moving to Canada, where he still lives, Le Figaro newspaper said.

A judicial official confirmed some details of Le Figaro's report, while saying investigators were angry that word had been leaked to media, fearing it could jeopardize the investigation.

The official, who spoke on condition of anonymity, said a Paris anti-terrorism judge had sent an official request for information about the suspect's stay in the United States.

Le Figaro said police were also trying to assemble any evidence - fingerprints, handwriting samples and DNA - that would link him with the bombing.

The newspaper, which did not cite its source, said the lead stemmed from a document that Germany obtained containing information about a now-defunct Palestinian radical group. The report said that other members of the Lebanese-Canadian's commando group had since died or were living in countries not friendly to the West.