EU's Solana appeals to Turkey not to fight against Iraq's Kurds 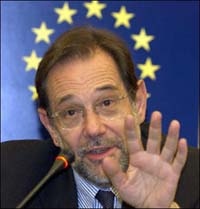 EU's Solana appeals to Turkey not to fight against Iraq's Kurds

"The question of security continues to be a fundamental issue to the stability of Iraq," Solana told reporters. "Any possibility of complicating even more the security situation in Iraq is something that should not be welcomed. That is the lesson we pass to our Turkish friends."

Turkey's Prime Minister Recep Tayyip Erdogan said Wednesday he would introduce a motion to his nation's parliament calling for cross-border military operations, a move which has raised concerns in both the EU and in the United States.

Turkey criticizes both the U.S. and Iraq for failing to eliminate Kurdish rebel bases in northern Iraq.

Rebels of the Kurdistan Workers Party, or PKK, have been fighting for autonomy in southeast Turkey since 1984 in a conflict that has claimed tens of thousands of lives.

If approved by Parliament, the motion would allow for an incursion at any time over the next year, Erdogan said, suggesting Turkey may not take immediate action, but instead may wait to see if the U.S. and its allies crack down on the rebel bases in northern Iraq.