The suspects of worst road accidents in Uganda, which killed 72 people in August, are found. Two Ugandan soldiers have been arrested. 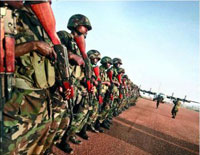 The crash killed 57 soldiers, 13 soldiers' wives and two children when their truck collided with a concrete barrier and overturned on a road 155 miles (250 kilometers) northeast of the capital, Kampala.

"The investigation revealed that these two commanding officers had criminal responsibility for the accident," Henry Obbo, the army spokesman in the area, told The Associated Press.

The charges against the soldiers - one of whom was driving the truck - were not made public. But Obbo said the men face a court martial and a possible death sentence if convicted.

In Uganda, trucks with makeshift benches are the usual means of transport over long distances. Road accidents are common due to bad vehicle maintenance and poor road conditions. Police estimate up to 2,000 people die on Uganda's roads each year.