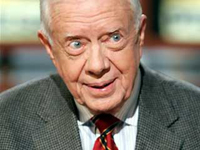 Former President Jimmy Carter said that the U.S. tortured prisoners in violation of the international law, as George W. Bush made up his own definition of torture and his vice president was a "militant."

"Our country for the first time in my life time has abandoned the basic principle of human rights," Carter said on CNN. "We've said that the Geneva Conventions do not apply to those people in Abu Ghraib prison and Guantanamo, and we've said we can torture prisoners and deprive them of an accusation of a crime."

Bush, responding to an Oct. 4 report by The New York Times on secret Justice Department memorandums supporting the use of "harsh interrogation techniques," defended the techniques Friday by proclaiming: "This government does not torture people."

Carter said Wednesday the interrogation methods cited by the Times, including "head-slapping, simulated drowning and frigid temperatures," constitute torture "if you use the international norms of torture as has always been honored - certainly in the last 60 years since the Universal Declaration of Human Rights was promulgated.

In an interview that aired Wednesday on BBC, Carter criticized Vice President Dick Cheney as "a militant who avoided any service of his own in the military."

Carter, who graduated from the U.S. Naval Academy in 1946 and served for seven years as an officer, went on to say Cheney has been "a disaster for our country. I think he's been overly persuasive on President George Bush."

"We're not going to engage in this kind of rhetoric," she said.

In the CNN interview, the Democratic former president disparaged the field of Republican presidential candidates.

"They all seem to be outdoing each other in who wants to go to war first with Iran, who wants to keep Guantanamo open longer and expand its capacity - things of that kind," Carter said.

He said he also disagreed with positions taken by Democratic Sens. Hillary Clinton and Barack Obama, who have declined to promise to withdraw all U.S. troops from Iraq over the following four years if elected president next year.