Syrian President: international peace conference has no chance for success 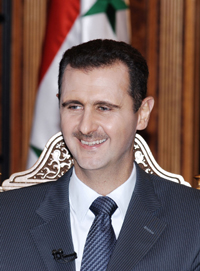 Syrian President: international peace conference has no chance for success

The U.S.-sponsored international peace conference on the Middle East has n chance for success, Syrian President Bashar Assad said and ruled out his country’s participation.

His comments come amid deep skepticism over the conference among Arab governments, which have expressed doubts the planned gathering in November will tackle the main issues of the conflict with Israel. Top allies Egypt, Jordan and Saudi Arabia have not said whether they will attend.

Arab League chief Amr Moussa predicted the conference would be a failure and said the United States was only hoping for a photo-op between Saudi and Israeli officials rather than real progress.

In an interview with two Tunisian newspapers, Syria's Assad made his most concrete statement yet casting doubt on his country's participation.

"Syria has not received an invitation to the conference, and even if it did, it will not take part in a conference that lacks the chances of success," Assad said.

The Bush administration has said it will invite adversary Syria to the conference. But Assad had said earlier that his country would not attend the meeting if it did not address Israel's occupation of the Golan Heights, which it captured from Syria during the 1967 Mideast war.

In Thursday's interview, Assad said the conference should have serious and clear goals and "should include all peace tracks including the Golan issue."

"The Syrian track is essential and the Golan issue is number one," he told the Ach-Chourouk and Le Quotidien newspapers.

The United States has kept quiet on the most basic details about the meeting, including precise dates, the guest list and the location - though it is expected to be in Annapolis, Maryland. U.S. Secretary of State Condoleezza Rice will be on the spot to fill in the blanks during a preparatory trip to the Middle East that is schedule to start this weekend.

In the Saudi capital Riyadh, the head of the six-country Gulf Cooperation Council Abdul-Rahman Attiyah called Thursday for "joint Arab-Palestinian action to set the conditions for the success the conference." He also expressed skepticism that the meeting would be successful "because Israel does not want peace."

Moussa warned of a likely failure of the conference during an international economic forum Wednesday night in Cairo.

"All what they (the Americans) want, as some say, is that the (Saudi Foreign Minister) Saud al-Faisal shake hands with Israeli Foreign Minister Tzipi Livni, that the two take pictures. This is a joke, it's not serious," Moussa said.

"Prince Saud al-Faisal will not do that ... it has been decided," he said.

In the interview, Assad acknowledged that relations with Saudi Arabia and Egypt were "not as they should be" but said his country was open to any initiatives to improve ties.

Damascus' relations with longtime U.S. allies Saudi Arabia, Egypt and Jordan have been cool, partly over what they see as Syria's role in promoting the interests of its ally Iran in the Arab world.

He warned against any U.S. military action against Iran, saying it would be "foolish and detrimental to the region and to the world." He did not elaborate.

Assad also confirmed that Turkey was trying to mediate between his country and Israel.

"We have told them (the Turks) that our stance toward peace does not change... All we want is a clear declaration by Israeli officials of their desire for peace and returning (occupied) land to Syria," he said.

"We also want guarantees that the full territory would return," he added.

Israel jets raided a target in northeastern Syria on Sept. 6, which Assad has described as an "unused military building" while Israeli officials have maintained an unprecedented wall of silence over the affair, though there have been reports - denied by Syria - that the target was a nascent nuclear facility being built with North Korean help.

Assad, in the interview, said Israel's silence reflected "the failure of Israeli or U.S. intelligence."

"They are trying to cover up their failure by shrouding it with mystery," he said.