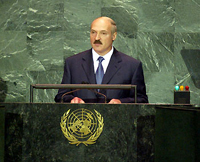 President of Belarus said Thursday that the construction on the country’s first nuclear power plant would be begun in 2008.

The project "is dictated not by some political ambitions, but by the necessity to ensure the country's energy security in case of a decrease in gas and oil resources, supply problems or the increase in energy carriers' costs," Lukashenko was quoted by ITAR-Tass news agency as saying.

No details were given, but officials earlier had said it would take four to eight years to build the plant at an estimated cost of US$2.5 billion to US$2.8 billion (EUR1.8 billion to EUR2 billion).

Belarus' Soviet-style economy has long been propped up by cheap energy resources from Russia. But Moscow this year sharply hiked prices for oil and gas, angering Lukashenko and prompting him to threaten to walk out of the economic union the two nations are moving toward.

The announcement also was likely to anger some Belarusians deeply wary of nuclear power and the devastating radioactivity that contaminated one-third of the country following the 1986 Chernobyl nuclear disaster in neighboring Ukraine.

"In a country still frightened by the Chernobyl syndrome this (decision) cannot take place without a broad public discussion," said Vasily Nesterenko of the Belard institute on nuclear safety in Minsk.