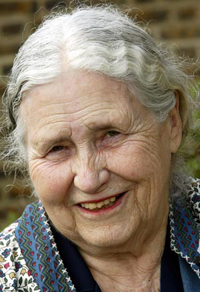 The the Swedish Academy announced Thursday that Doris Lessing, a British writer, had won the 2007 Nobel Prize in literature. She was said to be "that epicist of the female experience, who with skepticism, fire and visionary power has subjected a divided civilization to scrutiny."

Her work, which has drawn heavily from her time living in Africa, has explored the divide between whites and blacks, most notably in 1950's "The Grass Is Singing," which examined the relationship between a white farmer's wife and her black servant. The academy called it "both a tragedy based in love-hatred and (a) study of unbridgeable racial conflicts."

Lessing's agent, Jonathan Clowes, said Lessing was out shopping and the academy said it had not yet been able to contact her to tell her about the award.

"We are absolutely delighted and it's very well deserved," Clowes said.

Lessing, 87, was born to British parents who were living in what is now Iran. Her other works include the semi-autobiographical "Children Of Violence" series, largely set in Africa.

Her breakthrough was the 1962 "Golden Notebook," the academy said.

"The burgeoning feminist movement saw it as a pioneering work and it belongs to the handful of books that inform the 20th century view of the male-female relationship," the academy said in its citation announcing the prize.

Her other important novels include "The Summer Before Dark" in 1973 and "The Fifth Child" in 1988.

"The vision of global catastrophe forcing mankind to return to a more primitive life has had special appeal for Doris Lessing. It reappears in some of her books of recent years," the academy said. Those include "Mara and Dann" from 1999 and its sequel, "The Story of General Dann and Mara's Daughter, Griot and the Snow Dog," published in 2005.

"From collapse and chaos emerge the elementary qualities that allow Lessing to retain hope in humanity," the academy said.

Lessing is the second British writer to win the prize in three years. In 2005, Harold Pinter received the award. Last year, the academy gave the prize to Turkey's Orhan Pamuk.

A seasoned traveler of the world, Lessing has known many homes, from Persia to Zimbabwe to South Africa to London.

"When you look at my life, you can go back to the late 1930s," she told The Associated Press in an interview a year ago. "What I saw was, first of all, Hitler, he was going to live forever. Mussolini was in for 10,000 years. You had the Soviet Union, which was, by definition, going to last forever. There was the British empire - nobody imagined it could come to an end. So why should one believe in any kind of permanence?"

Lessing's family moved to a farm in southern Rhodesia, which is now Zimbabwe, in 1925, an experience she described in the first part of her autobiography "Under My Skin" that was released in 1944.

Because of her criticism of the South African regime, and its apartheid system, she was prohibited from entering the country between 1956 and 1995. Lessing, who was a member of the British Communist Party in the 1950s, had been active in campaigning against nuclear weapons.

The literature award was the fourth of this year's Nobel Prizes to be announced and one of the most hotly anticipated given the sheer amount of guessing it generated in the weeks leading up to award.

On Wednesday, Gerhard Ertl of Germany won the 2007 Nobel Prize in chemistry for studies of chemical reactions on solid surfaces, which are key to understanding such questions as why the ozone layer is thinning.

Prizes for peace and economics will be announced through Oct. 15.

The awards - each worth 10 million Swedish kronor (US$1.5 million; EUR1.1 million) - will be handed out by Sweden's King Carl XVI Gustaf at a ceremony in Stockholm on Dec. 10.