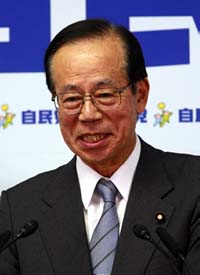 Japanese top officials do their best to secure a Japanese man kidnapped in Iran while traveling alone, the Foreign Ministry said.

The man, 23, had been kidnapped in southeast Iran, which borders Pakistan and Afghanistan, ministry official Yosuke Kawana said, adding that the case surfaced Monday when the Japanese Embassy notified Tokyo.

Chief Cabinet Secretary Nobutaka Machimura told reporters Thursday that the man, who had called the embassy, had been confirmed alive.

"It's extremely regrettable," Machimura said of the incident. "We are doing our utmost for his safe release."

"We would like to somehow get him back as soon as possible," Prime Minister Yasuo Fukuda told reporters.

The man told embassy officials he was kidnapped Sunday by an armed group and that he was allowed to telephone his family in Japan to tell them he was in good health, Senior Vice-Foreign Minister Itsunori Onodera said later Thursday.

Citing security reasons, officials refused to give further details, including whether there was a ransom request or whether it was in contact with the victim or kidnappers.

Kyodo News agency identified the man as Satoshi Nakamura, a college student. It said he was believed to have entered Iran from Pakistan and was kidnapped on his way to an ancient fort in the southeastern Kerman province.

The Japanese Foreign Ministry issued a travel warning to Japanese visitors to Iran.

The capture follows a series of kidnappings in Iran's lawless southeast this year.

In August, heavily armed bandits abducted two Belgian tourists while traveling from the historical city of Bam to Zahedan, capital of Sistan-Baluchistan province on the Pakistan border. Both have been released.

Separately, bandits abducted 12 Iranians in August, and Pakistani security forces succeeded in setting the hostages free after clashing with the gunmen.

Iran has blamed kidnappings of foreigners in the area on criminals and drug smugglers, and foreigners are urged to be cautious when traveling there.

The region has also been hit by explosions targeting Iranian troops, blamed on militants of Iran's minority Sunni Muslim population. Tehran accuses the United States of backing the militants to destabilize the country.