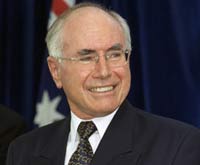 The referendum, which Howard recognized was a major readjustment of his previous thinking on Aboriginal affairs, would be held within 18 months - if he wins elections due to be held within weeks.

But Howard, who is way behind in opinion polls heading into the election, again ruled out making an apology on behalf of the nation to Aboriginal people for policies that have contributed to making them the poorest, least healthy and most disadvantaged segment of Australian society.

Many Aborigines say an apology would be the starting point for reconciliation between black and white Australians.

"The time is right to take a permanent, decisive step toward completing some unfinished business of this nation," Howard said in a speech in Sydney, calling the past treatment of Aborigines "the most blemished chapter of Australian history."

Howard said the referendum he would ask Australians to back would "formally recognize indigenous Australians in our constitution - their history as the first inhabitants of our country, their unique heritage of culture and languages, and their special, though not separate, place within a reconciled, indivisible nation."