Rocket attack on main U.S. base near Baghdad kills 2 and wounds 40 people

A rocket or mortar attack on the main U.S. base near Baghdad killed two members of the U.S.-led coalition forces and wounded 40 people, the military said Thursday. 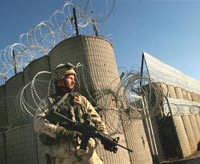 Rocket attack on main U.S. base near Baghdad kills 2 and wounds 40 people

The attack occurred Wednesday at the Camp Victory, a sprawling garrison that houses the headquarters of American forces in Iraq, according to a statement.

Two coalition force members were killed and 38 wounded, the military said. It also said two "third country nationals" were wounded. It did not identity them further, but military spokesman Lt. Col. Rudolph Burwell said the term usually refers to foreign contractors and not Iraqis or Americans.

The attack is under investigation, the statement said.

Most troops stationed at Camp Victory are American but other coalition soldiers are based at the complex near Baghdad International Airport. No further details on the attack were immediately released.

Camp Victory and other U.S. bases in Iraq have frequently come under fire, but attacks with such a large number of casualties are rare.

On Sept. 11, one person was killed and 11 were wounded in a rocket attack. The U.S. military said a 240 mm rocket provided to Shiite extremists by Iran was used in that attack.

The U.S.-protected Green Zone, which houses the American and British embassies and the Iraqi government headquarters, is far more vulnerable as it is situated in central Baghdad.