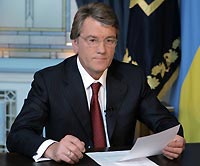 At home, Yushchenko's party and the bloc led his charismatic Orange Revolution ally Yulia Tymoshenko received enough votes in the Sept. 30 election to form a slim parliamentary majority. But Yushchenko has encouraged them to form a new Cabinet with the party of his main rival, Prime Minister Viktor Yanukovych, the winner of the ballot.

In Slovakia, Yushchenko was aiming to boost ties between this European Union member and his country, which aspires to join the EU and NATO while trying to maintain ties with Russia.

Following Thursday's meeting with Slovak President Ivan Gasparovic, Yushchenko was expected to address a conference at the Slovak Foreign Ministry to detail his country's EU aspirations.

On Friday, he was to meet Prime Minister Robert Fico before traveling to the eastern part of the country to meet with representatives of the Ukrainian community.

Slovakia has begun shutting down its nuclear power plant in Jaslovske Bohunice, a process that will be completed by 2008, and is negotiating to get electricity supplies from Ukraine.