Conclusion of mental retardation not to save man from death sentence

The Ohio Supreme Court sentenced a man to death in spite of government's declaration of mental retardation. 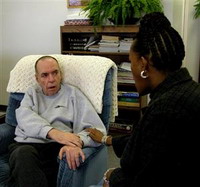 Conclusion of mental retardation not to save man from death sentence

The seven-member court ruled unanimously in favor of the conviction and death sentence of James Frazier for the 2004 slaying of Mary Stevenson in the Toledo apartment building where both lived.

Frazier, 66, entered Stevenson's apartment March 2, 2004, strangled the 49-year-old woman, cut her throat and fled with two of her purses.

The building where both lived is a federally subsidized complex for poor people who have disabilities or are elderly. Frazier was granted a Social Security disability in 1994 based on an administrative finding that he was mentally retarded, Wednesday's court ruling said.

Justice Evelyn Lundberg Stratton said Frazier did not present the IQ test score from that finding or other criteria Social Security officials used in making this diagnosis.

Frazier was found competent to stand trial and during the trial dropped his mental retardation claim. Two doctors also said he was not mentally retarded, with an IQ of at least 75, Wednesday's court ruling said. An IQ of below 70 is one of the signs of mental retardation.

The U.S. Supreme Court, in the 2002 case of Atkins v. Virginia, banned the execution of the mentally retarded as unconstitutional.

Lundberg Stratton noted the state Supreme Court had yet to decide whether a death row defendant, such as Frazier, could waive a claim of mental retardation under the Atkins ruling. But other courts have found inmates can waive that claim, she said.