President George W. Bush appealed to the U.S. Congress to reject legislation that would declare the World War I-era killings of hundreds of thousands of Armenians a genocide. 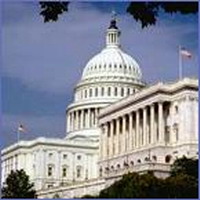 Bush spoke as the House of Representatives' Foreign Affairs Committee was preparing to vote on the measure that Turkey insists could severely damage U.S. relations with a NATO ally that has been a major portal for U.S. military operations in the region.

"Its passage would do great harm to our relations with a key ally in NATO and in the global war on terror," the president said.

As debate began, the panel's chairman, Democratic Rep. Tom Lantos, raised the possible security implications of the measure. Lantos, a Hungarian-born survivor of the Holocaust, backed a similar resolution as minority leader two years ago.

"We have to weigh the desire to express our solidarity with the Armenian people ... against the risk that it could cause young men and women in the uniform of the United States armed services to pay an even heavier price than they are currently paying."

Turkey has indicated that passage of the resolution could be the trigger for that country to impede logistical and other U.S. military traffic currently using Turkish airspace.

Shortly before Bush spoke against the resolution, Secretary of State Condoleezza Rice and Defense Secretary Robert Gates stood before microphones on the White House driveway to express the administration's concerns.

"The passage of this resolution at this time would be very problematic for everything we are trying to do in the Middle East," Rice said.

Gates said that 70 percent of U.S. air cargo headed for Iraq goes through Turkey, as does about a third of the fuel used by the U.S. military in Iraq.

"Access to airfields and to the roads and so on in Turkey would very much be put at risk if this resolution passes and Turkey reacts as strongly as we believe they will," Gates said. He also said that 95 percent of the newly purchased Mine Resistant Ambush Protected vehicles are being flown through Turkey to get to Iraq.

Many Democrats and some Republicans on the committee indicated in their comments that they would vote in favor. Many said the moral implications outweighed security concerns and friendship with Turkey.

"The sad truth is that the modern Government of Turkey refuses to come to terms with this genocide," said Republican Rep. Chris Smith. "For Armenians everywhere, the Turkish government's denial is a slap in the face."

Turkey made a final direct appeal to U.S. lawmakers to reject the resolution. The U.S. vote comes as Turkey's government was seeking parliamentary approval for a cross-border military operation to chase separatist Kurdish rebels who operate from bases in northern Iraq. The move, opposed by the UnitedStates, could open a new war front in the most stable part of Iraq.

"I have been trying to warn the (U.S.) lawmakers not to make a historic mistake," said Egemen Bagis, a close foreign policy adviser to Turkish Prime Minister Recep Tayyip Erdogan.

Yet with the House's first order of business Wednesday, Speaker Nancy Pelosi made clear that Turkey's position was a hard sell. She introduced the Supreme Patriarch of all Armenians, Karekin II, to deliver the morning prayer - a daily ritual intended to be apolitical.

"With the solemn burden of history, we remember the victims of the genocide of the Armenians," he said in the House. "Give peace and justice on their descendants."

Pelosi spokesman Nadeam Elshami said the timing of Karekin's visit was a coincidence. Rep. Joe Knollenberg, a Republican, had requested the leader deliver a morning prayer earlier this year. The House chaplain arranged the visit based on Karekin's schedule, and was not aware of the committee's plans, Elshami said.

A measure of the potential problem came in a warning the U.S. Embassy in Ankara issued Tuesday to U.S. citizens in Turkey of "demonstrations and other manifestations of anti-Americanism throughout Turkey" if the bill passes the committee and gets to the House floor for a vote, the embassy statement said.

On Wednesday, hundreds of Turks marched to U.S. missions in Turkey to protest the bill. In Ankara, members of the left-wing Workers' Party chanted anti-American slogans in front of the embassy, the state-run Anatolia news agency reported. A group of about 200 people staged a similar protest in front of the U.S. Consulate in Istanbul, private NTV television said.

Anatolia quoted a party official as saying that the "genocide claim was an international, imperialist and a historical lie."

The basic dispute involves the killing of up to 1.5 million Armenians by Ottoman Turks around the time of World War I, an event widely viewed by genocide scholars as the first genocide of the 20th century. Turkey denies that the deaths constituted genocide, says the toll has been inflated, and insists that those killed were victims of civil war and unrest.

Speaker Pelosi and the second-ranking Democrat in the House, Majority Leader Steny Hoyer, met Wednesday with Turkish Ambassador Nabi Sensoy but emerged from the meeting unswayed. Hoyer told reporters he expects a floor vote on the measure before the House adjourns for the year.

Hoyer said he hoped that Turkey would realize it is not a condemnation of its current government but rather of "another government, at another time."

Armenian-American interest groups also have been rallying supporters in the large diaspora community to pressure lawmakers to make sure that a successful committee vote leads to consideration by the full House.