Mideast meeting to be prepared well

International conference on Mideast peace is under the threat of frustration. The foreign minister of Egypt said the meeting must be well-prepared if it is to take place at all. 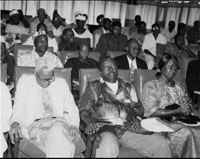 Mideast meeting to be prepared well

Ahmed Aboul Gheit said many questions remain to be answered before Egypt and other Arab states can attend the meeting, expected to be held north of Washington in mid- to late-November.

"We have to ensure that there will be success," he said after meeting his Czech counterpart Karel Schwarzenberg.

"We have been questioning many of the aspects (of the gathering)," Aboul Gheit said. "We are asking for the information about the intention of the host of the United States. What are they planning for that conference, what are the objectives of the conference to ensure a success for such a meeting?"

Aboul Gheit said the meeting's agenda needs to be approved by the Israelis and Palestinians.

U.S. Secretary of State Condoleezza Rice is to visit Israel and Arab states this week in a push to put the pieces in place for the conference.

Egypt President Hosni Mubarak has shown reluctance to support the gathering, which he and Aboul Gheit have criticized as lacking an agenda and "an endgame" to resolve the Israeli-Arab issue.

Other Arab governments also have expressed skepticism about the usefulness of the meeting if it does not address the core issues of the Israeli-Palestinian conflict as well as broader Arab-Israeli disputes.