"Iran must be encouraged to make its nuclear program fully transparent," President Vladimir Putin said Wednesday after his Kremlin talks with French President Nicolas Sarkozy. Also he pointed at the lack of definitive proof that Tehran was seeking to build atomic weapons. 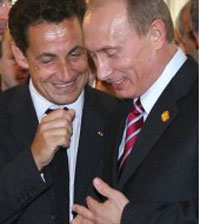 Sarkozy, who sought to crank up pressure on Iran, expressed hope that Putin's trip to Iran next week could help make Tehran more inclined to meet international demands.

"We are sharing our partners' concern about making all Iranian programs transparent," Putin said at a news conference after his talks with Sarkozy which followed their dinner Tuesday at the Russian president's country residence.

Putin added that Iran already had shown an increased readiness to make its nuclear program more transparent. "We agreed yesterday, and the president confirmed it, that Iran is making certain steps toward the international community to achieve that," Putin said.

Putin is to make his first visit to Iran early next week for a summit of Caspian Sea nations.

Sarkozy said Putin's trip could encourage Iran to be more cooperative: "What's very important is the willingness to cooperate _ that's the essential point. This is an issue that concerns the planet."

Russia has opposed the U.S.-led push for tougher sanctions against Iran and called for more checks and inspections of Iranian facilities by an international nuclear watchdog.

"We have worked cooperatively with our partners at the United Nations Security Council, and we intend to continue such cooperative work in the future," Putin said.

But he said with no "objective data" showing Iran is developing nuclear weapons, "we proceed from an assumption that Iran has no such plans."

On Kosovo, Sarkozy said it was important to find a decision that wouldn't humiliate any party.

Sarkozy has taken a tough line toward Russia, recently accusing it of "brutality" in exercising its energy dominance, and courting central and eastern European leaders who have bristled at Moscow's renewed influence.

But on his first presidential visit to Russia, he struck a decidedly upbeat note after hours of talks with Putin on a battery of touchy subjects.

Sarkozy pointed at the opportunities of bilateral cooperation in such areas as space and nuclear energy, and added that France wants to be a "privileged partner of Russia." Touching on France's presidency in the European Union next year, he said Russia and Europe were "natural partners."

Speaking after talks with Putin, he pointed to the need for transparency and respect for free-market rules in the bilateral economic ties and promised to take a nondiscriminatory attitude toward Russian companies willing to purchase assets in France.

Western critics long have accused Putin of backsliding on democracy, muffling dissent and free media and harassing NGOs - the claims the Kremlin has angrily denied. Sarkozy on Wednesday was set to meet with representatives of Russian NGOs.

Putin said Wednesday that NGOs were important and his government was trying to cooperate with them, but in a steely note warned against foreign interference in Russia's affairs: "It's bad when such organizations are being used by one state against others to achieve some goals."