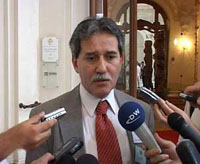 The United States are just "obstructing" the Kosovo talks by promising independence to the province, Serbia said Wednesday.

Serbia's minister for Kosovo, Slobodan Samardzic, said that repeated statements by U.S. officials that Kosovo will one day gain independence from Serbia, "persistently obstruct" current talks between Belgrade and the secession-seeking Kosovo Albanians.

"Amid those declarations by American officials, we are asking ourselves: what's the point of the negotiations when the outcome is already known?" Samardzic said.

"Those are destructive activities aimed against a possible negotiated solution for Kosovo," Samardzic said.

Diplomats from the United States, the European Union, and Russia are trying to broker a deal between Kosovo's ethnic Albanians - who want full independence from Serbia - and Serbian officials, who oppose any such move.

Kosovo remains formally part of Serbia, but the province has been run by the U.N. and NATO since 1999, when NATO bombed Serbia to stop a military campaign against Albanian separatists.

At the United Nations on Tuesday, the U.S. ambassador, Zalmay Khalilzad, said that the negotiators must meet a December deadline to determine the future status of Kosovo, while Russia's ambassador Vitaly Churkin said it would not be "the end of the world" if the deadline was missed.

In London on Tuesday, Kosovo's Prime Minister Prime Minister Agim Ceku said independence was inevitable and that the province will declare it soon after the deadline, even if no agreement was reached and regardless of whether the European Union backed the move.