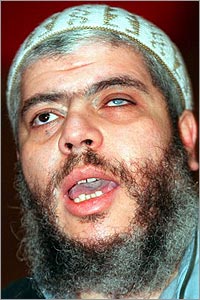 A court was told Wednesday that a man had pleaded guilty to soliciting murder in connection with an alleged plot to organize terrorist training camps across Britain.

Atilla Ahmet, a former spokesman for jailed radical cleric Abu Hamza al-Masri, admitted to three counts of encouraging others to commit murder in a hearing at London's Central Criminal Court.

Details of Ahmet's plea came as the trial of five others linked to Ahmet began at Woolwich Crown Court on Wednesday.

The men were among 12 people arrested following September 2006 raids on a halal Chinese restaurant and other locations in London.

Hamid is accused of organizing camps attended by the July 21, 2005, bomb plotters, who failed in their attempt to blow themselves up aboard a bus and three subway trains in central London.

Prosecutor David Farrell said Hamid took the would-be suicide bombers on camping and paint-balling expeditions around Britain, trips he said were designed to "foster within the participants that they were training for 'Jihad' against the 'Kuffir,' or non-believers."

He added that Ahmet traveled to Hamid's home to attend meetings where "aggressive unlawful violence" was preached in the name of Islam.

Information on Ahmet's plea had been kept secret to avoid prejudicing the jury consider Hamid's case, however the restrictions were lifted on Wednesday. Ahmet was known as a top aide to al-Masri, who is serving a seven-year sentence in Britain for fomenting racial hatred and urging his followers to kill non-Muslims.