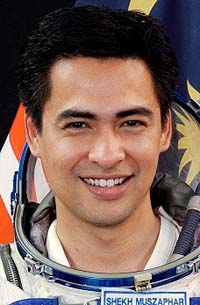 The latest checks to space suits were made and a Soyuz rocket was fueled Wednesday, as a Russian, an American and a Malaysian prepared to blast off en route to the international space station.

In the Malaysian capital, Kuala Lumpur, television networks geared up for a live broadcast of the launch from the Russian-leased Baikonur cosmodrome. Sheikh Muszaphar Shukor will be the first Malaysian in space.

He will join U.S. astronaut Peggy Whitson and Russian cosmonaut Yuri Malenchenko aboard the cramped capsule on the two-day trip to the orbiting station.

As engineers checked the mounted rocket and began fueling it, medics and flight specialists did final medical tests on the three and pressure checks on their space suits.

"I feel great. I just can't wait to go up for the Malaysian people," Shukor told reporters as he boarded a bus to take him to the launch pad.

Shukor, a 35-year-old physician, will spend roughly nine days on the station, performing experiments involving diseases and the effects of microgravity and space radiation on cells and genes before returning to Earth with two of the station's current crew - cosmonauts Fyodor Yurchikhin and Oleg Kotov.

Shukor will be the ninth Muslim in space and Malaysian newspapers on Wednesday devoted several pages and published special pullouts about the mission, which coincides with the last days of Ramadan, the holy month when Muslims fast from dawn until sundown.

On Tuesday, he told reporters at Baikonur that his trip will be an inspiration for his southeast Asian nation as well as to other Muslims all over the world.

"It's a small step for me, but a great leap for the Malaysian people," he said, rephrasing Neil Armstrong's legendary words after the Apollo landing on the Moon.

The US$25 million (EUR18 million) agreement for a Malaysian astronaut to fly to space was negotiated in 2003 along with a US$900 million deal for Malaysia to buy 18 Russian fighter jets.