Putin: Iran must be encouraged to transparent to disclose nuclear program 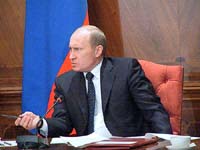 Putin: Iran must be encouraged to transparent to disclose nuclear program

"We are sharing our partners' concern about making all Iranian programs transparent," Putin said at a news conference after talks with visiting French President Nicolas Sarkozy.

At the same time, Putin said there is no proof that Iran is pursuing a nuclear weapons program and said Tehran has shown some willingness to cooperate.

"We agreed yesterday, and Mr. President confirmed it, that Iran is making certain steps toward international community to achieve that," Putin said.

Putin is to make his first visit to Iran early next week for a summit of Caspian Sea nations.

Sarkozy said Putin's trip to Tehran could encourage Iran to be more cooperative. "After the trip, there could be a will to cooperate - that is essential," he said.

Russia has opposed the U.S.-push for tougher sanctions against Iran and called for more checks and inspections of Iranian facilities by an international nuclear watchdog.

"We have worked cooperatively with our partners at the United Nations Security Council, and we intend to continue such cooperative work in the future," Putin said.

But he said with no "objective data" showign Iran is developing nuclear weapons, "we proceed from an assumption that Iran has no such plans."