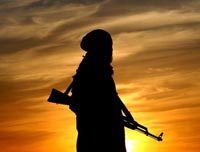 The Colombian and Filipino workers were released late Tuesday in the main oil center of Port Harcourt, and both were in good health, said police spokeswoman Ireju Barasua. In Manila, the Philippine Foreign Affairs Department confirmed the release.

Gunmen wearing military fatigues and traveling by boat attacked the workers' riverside compound near Port Harcourt on Sept. 27, spiriting away the hostages. A Colombian oil worker died in the raid.

Barasua said the kidnappers handed over the hostages after military authorities threatened and attack to liberate the pair, working for oil and gas services firm Saipem, which is 43 percent owned by Eni SpA.

Some 200 foreigners have been seized in southern Nigeria since late 2005, when a new militant group launched attacks bombings and kidnappings targeting the oil industry, cutting nearly one quarter of regular production in Nigeria, Africa's biggest crude producer. Criminal gangs soon joined the practice of kidnapping.

Hostages are generally released unharmed after a ransom is paid, but the violence has caused many international companies to curtail their operations in the Niger Delta oil region. New President Umaru Yar'Adua has made calming the area a main national priority, and the government has reached out to militant groups. His vice president is from one of the main ethnic groups in the region agitating for more oil-industry funds for their impoverished region.

While sporadic attacks still occur, violence has waned since Yar'Adua took power May 29 after deeply flawed elections that international observers have deemed not credible.