The inquest into the deaths of Princess Diana and her boyfriend Dodi Fayed resumes in London Wednesday after jurors spent two days in Paris revisiting the last moments of the couple's lives. 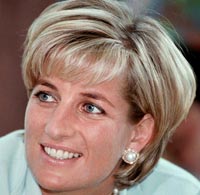 The 11 inquest jurors, directed by British coroner Lord Justice Scott Baker, made the unprecedented trip to Paris where they visited the private suite where Diana and Dodi spent their evening before retracing the fateful final journey that ended in disaster as the couple's chauffeur-driven Mercedes slammed into a tunnel pillar.

French authorities and Britain's Metropolitan Police reported chauffeur Henri Paul was drunk and speeding, and that the Aug. 31, 1997, crash was an accident - not a murder plot, as claimed by Fayed's father, Egyptian-born billionaire Mohamed al Fayed. But Baker said it is for the jury to decide once and for all how they died.

The inquest - required by British law when someone dies unexpectedly, violently or of unknown causes - had been delayed for 10 years because of the two exhaustive investigations.