Fighter jets streaked across overcast skies Wednesday as Taiwan held a National Day military parade for the first time since it halted such displays of war-fighting prowess in 1991 to ease tensions with rival China. 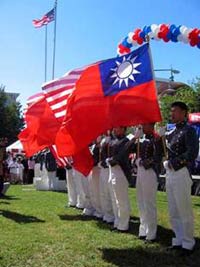 President Chen Shui-bian denounced China's "totalitarianism" and its recent military buildup while renewing his vow to seek membership in the United Nations, saying his self-ruled island has the right to rejoin the world body despite objections from its communist-ruled neighbor.

"Taiwan and China are two separate states that don't belong to each other, and this is a historical fact as well as the reality," Chen said inside the ornate Presidential Office Building before the parade.

"The problem in the Taiwan Strait today does not rest with Taiwan .... but with China's totalitarianism, authoritarianism and dictatorship," he said.

Chen denounced China's rapid military buildup and urged the world to demand Beijing dismantle its hundreds of missiles deployed against the island. "Only with China awakening to democracy will there be eternal peace in the world," he said.

U.S.-made F-16s, French-made Mirages and Taiwan-made IDF fighters flew in formations above the presidential building to kick off the parade as ramrod-straight honor guards in blue and white uniforms wielded rifles on the ground.

Armored personnel carriers roared by along with navy radar and satellite communication vehicles. They were followed by launch vehicles carrying U.S. Patriot II and Avenger anti-missiles systems as well as indigenously developed ship-to-ship and air-to-air missiles.

Taiwan had stopped such parades 16 years ago as it sought to improve relations with communist-ruled China following the island's transformation to democracy. Taiwan and China split amid civil war in 1949, and China still claims the island as part of its territory and has repeatedly threatened the use of force to stop any formal independence by Taiwan.

But Chen - who steps down in May after eight years in power - has campaigned to underscore the island's sovereignty, including a push for a referendum to back his government's bid to rejoin the United Nations. The ruling Democratic Progressive Party also passed a resolution last month to emphasize Taiwan's separateness from China.

The Presidential Office Building was adorned with large red blocks of Chinese characters saying "Taiwan to Join the United Nations," instead of the usual "Republic of China National Day."

The parade appeared aimed at easing public worries the island might be unprepared for a conflict with China. The highlights were two locally developed missiles unveiled for the first time.

The Hsiung Feng (Brave Wind) III ship-to-ship missile is believed to be capable of attacking fuel tanks and ammunition depots on a vessel.

The Tien Kung (Sky Bow) III - an anti tactical ballistic missile - is believed to be able to track and knock down aircraft and cruise missiles.

But the military did not show a long-range cruise missile because it is still under development. The cruise missile is believed to be able to strike Shanghai, the financial capital of China.

National Day marks the 1911 revolution that toppled the Qing dynasty and established the Republic of China, the first republic in China.

Taiwan's opposition politicians refused to participate in official celebrations to protest what they see as Chen's readiness to dump the island's official name, which connotes eventual unification of Taiwan and China.