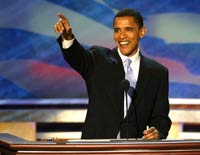 The wife of Democratic presidential candidate Barack Obama escaped injury Tuesday when the vehicle that was carrying her to a campaign event in Iowa collided with a motorcyclist.

The motorcyclist was injured and taken to the hospital, said Katie McCormick Lelyveld, a spokeswoman for Michelle Obama.

None of the campaign staff in the vehicle with Mrs. Obama were hurt.

The vehicle was hit by the motorcycle as it attempted a left turn just south of Hampton, where Michelle Obama was due at a rally.

She later told the crowd the event would be rescheduled.