Security convoy guards opened fire on a car at an intersection in central Baghdad, killing two Christian women. Dubai-based security firm was behind the shootings. 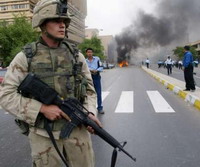 Representatives of the company in Baghdad declined to comment, but The Times of London quoted a spokesman in Dubai as saying the Unity guards issued warnings to the car and opened fire when it failed to stop.

Khalaf said the government and the company had both launched separate investigations into the incident but initial findings showed that the guards fired 19 bullets.

"They apologized and said they are ready to meet all the legal commitments," he said.