A miracle of Georgia - former defense minister was freed on a multimillion-dollar bail early Tuesday after taking back hi accusations against president. The question: where did the official get such money with his salary as large as $1.500? 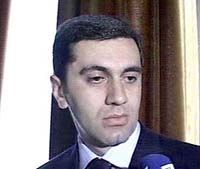 Georgian news reports said Irakly Okruashvili had left the country with his family shortly after being released, but his lawyer said he stayed home.

Irakly Okruashvili was arrested Sept. 27, the day after the accusations, which were dismissed by President Mikhail Saakashvili as "unpardonable lies."

Okruashvili was charged with extortion, money-laundering and abuse of power.

On Monday, Nika Gvaramia, Georgia's deputy chief prosecutor, said Okruashvili had retracted his accusations and admitted he made them for political purposes.

Gvaramia also said that Okruashvili had pleaded guilty to charges of extortion and failure to properly perform his duties.

Georgian television stations on Monday broadcast footage of the questioning in which Okruashvili retracted his accusations. Okruashvili, wearing a track suit, looked tense and tired but spoke clearly.

He took back his allegations of corruption and his claim that Saakashvili in 2005 tried to encourage him to kill Badri Patarkatsishvili, a prominent businessman.

A court in the capital, Tbilisi, ruled Monday to free Okruashvili on bail equivalent to US$6 million (EUR4.3 million). Okruashvili was freed overnight after the bail was paid and was escorted home by police.

He refused to answer reporters' questions.

The Georgian Pirveli news agency quoted Okruashvili's bodyguards as saying he had left the country with his family, but Okruashvili's lawyer, Eka Beselia, said he stayed home.

Beselia told reporters she visited Okruashvili at his home in Tbilisi and he told her he didn't know who had paid the bail. She added that Okruashvili's behavior seemed "abnormal," but didn't elaborate.

Okruashvili was a longtime Saakashvili ally who served as his defense minister until late last year.

His accusations and arrest have thrown the ex-Soviet nation into its worst political turmoil since Saakashvili was propelled to power in the 2003 uprising known as the Rose Revolution.

Speaking on a visit to Copenhagen Tuesday, Saakashvili said Okruashvili's release and the allegations he retracted was a test case for Georgia.

"It is a great test for the rule of law in Georgia," Saakashvili said after a meeting with Danish Prime Minister Anders Fogh Rasmussen.

He repeated that Okruashvili "had zero proof of anything."

"If you cannot produce evidence, then you should retract that allegation," Saakashvili told reporters.

Opposition leaders said Monday that Okruashvili had been forced into making his statement and promised to go ahead with protests demanding Saakashvili's ouster.

Adding to the tensions, Patarkatsishvili, the businessman whom Okruashvili said Saakashvili had wanted him to kill, stood to lose his position as chairman of the nation's Olympic Committee as members of its executive committee prepared to launch a no-confidence motion.