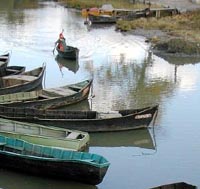 Ukrainian officials said that a nearly mile-long slick of an unknown pollutant had been detected moving down the Danube river toward the Black Sea.

The 1.5 kilometer-long and 5 meters (16-foot) -wide slick, which was detected Monday in the Ukrainian segment of the Danube river, is believed to have come from neighboring Romania, said Sergei Zablotsky, spokesman for the regional branch of Ukraine's Emergency Situations Ministry.

Zabolotsky alleged the slick could be the result of a Romanian plant dumping technological waste into the river. Environmental officials were taking samples of the substance to determine its nature and whether it represented any danger, he said.

Officials in Romania could not immediately be reached for comment.

Hotspots and Incidents
Up to 16,000 Ukrainian soldiers entrapped in Luhansk People's Republic