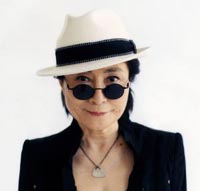 A monument in memory of John Lennon is to be unveiled by Yoko Ono Tuesday.

Ono was due to light the Imagine Peace Tower on Videy island near the Icelandic capital on what would have been Lennon's 67th birthday.

The former Beatle was shot dead outside his New York apartment building on Dec. 8, 1980 by deranged fan Mark David Chapman.

Ono was due to be joined for the ceremony by the couple's son, Sean Lennon, Beatles drummer Ringo Starr and bandmate George Harrison's widow Olivia.

Paul McCartney also was invited, but it was not known whether he would attend.

The tower is a beam of light, radiating from a wishing well bearing the words "imagine peace" in 24 languages. The plan is for it to be lit each year between his birthday, Oct. 9, and Dec. 8.

Ono, an artist, said she had gathered hundreds of thousands of wishes for world peace at gallery shows around the world. The wishes will be stored in capsules and buried on the island, each topped with a tree.

Ono, 74, has said she came up with the concept for the light tower in 1965 and that Lennon was interested.

"This is the biggest birthday present I gave to John," Ono told The Associated Press last month. "He's very, very happy about it, I know."

She said she chose Iceland, the world's northernmost country, because it was a very eco-friendly country that relied on geothermal energy.

"It's so beautiful," she said. "There's a certain strangeness to it. I would like to say it's magical."