Israeli Prime Minister Ehud Olmert told his parliament he won't be deterred from seeking a peace deal with the Palestinians despite the need for painful concessions, warning that failure would mean a "demographic struggle steeped in blood and tears." 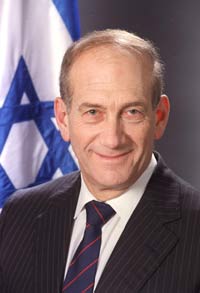 In his speech Monday, Olmert was short on specifics, even as his closest political ally, Vice Premier Haim Ramon, talked publicly about a future division of Jerusalem - long taboo in Israeli politics.

The dispute over Jerusalem is one of the most explosive issues in the Israeli-Palestinian conflict. Ramon said in radio interviews Monday that the three main parties in Olmert's coalition all favor a division, and disagree only over where the line should be drawn.

Hawkish Cabinet minister Avigdor Lieberman said Monday he is ready to hand over some Arab neighborhoods of the city.

The division proposals would fall far short of a Palestinian demand to set up their future capital in all of the Israeli-annexed eastern sector of the city, captured in the 1967 Mideast War. The eastern part contains the Old City, home to major Jewish, Muslim and Christian shrines.

A poll published Tuesday in the Yediot Ahronot daily indicated that a solid majority of the Israeli public opposed any Palestinian rule in the city.

The survey, by the Dahaf Research Institute, said 63 percent of respondents declared that Israel should not give the Palestinians sovereignty over Arab parts of east Jerusalem under any circumstances.

It said that 20 percent would accept a change as part of a permanent peace treaty with the Palestinians and a further 11 percent would agree if a majority of Israelis voted for it in a referendum. One percent did not answer, the paper said. Dahaf said it polled 500 people and its survey had a margin of error of 4.5 percentage points.

Olmert addressed his parliament before Israeli and Palestinian teams met for the first time to start drafting a joint document that would guide negotiators in future peace talks. The document, which is to address the key disputes - borders, Jerusalem, Israeli settlements and Palestinian refugees - is to be the centerpiece of a U.S.-hosted Mideast conference in November.