Authorities started a search in the rugged central Washington Cascade mountains for a missing plane with up to 10 people from a skydiving company on board. 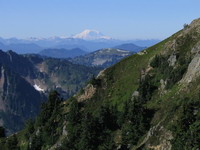 The Cessna 208 Grand Caravan left Star, Idaho, about 7 p.m. Sunday en route to Shelton, Washington in the western part of the state, but did not arrive as scheduled, said Mike Fergus of the Federal Aviation Administration.

A hunter in the White Pass area told police he saw a plane flying low and heard a crash about 8 p.m. Sunday.

The plane is registered to Kapowsin Air Sports of Shelton. Ten people from the skydiving company Skydive Snohomish were scheduled to be on the plane, but it was unknown how many were actually on board, said Geoff Farrington, Kapowsin's co-owner.

The family owned company, more than 60 years old, has never lost a plane, he said. The plane also had never experienced mechanical problems.

The names of those on board were not released, but Farrington said their families had been notified.

Officials at Skydive Snohomish did not return a telephone message seeking comment.

Nisha Marvel of the Washington Department of Transportation said the search area had been narrowed to southwest of Rimrock Lake, about 30 miles (48 kilometers) west of Yakima in central Washington, due to the hunter's report and radar information. The Transportation Department was coordinating the air search, while Yakima County Search and Rescue was coordinating a ground search.

Officials said the plane's emergency locator was not activated.