Two Utah men were arrested under suspicion of trying to illegally export surplus pieces of F-14 fighter jets, a plane that is flown only in Iran. 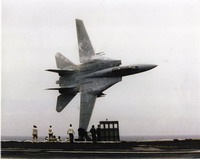 Abraham Trujillo, 61, and David Waye, 22, both of Ogden, are alleged to have tried exporting the parts to Canada, but the charges do not specify how they supposedly got the parts and do not list all buyers.

Federal agents placed online orders, then intercepted the goods before they made it out of the country, the charges said.

Trujillo and Waye were charged Friday with three counts each of attempting to export a defense article without a license. Telephone listings could not be found for the men.

Iran, trying to maintain its F-14s, is aggressively seeking components from the retired U.S. Tomcat fleet. Members of Congress have expressed concerns about the Department of Defense selling surplus F-14 parts because they are worried they could wind up in Iranian aircraft.

The U.S. sold the F-14 to Iran in the 1970s when it was under the rule of the Western-friendly shah. In 1979, the shah was deposed, and the U.S. eventually banned the sale of military equipment to Iran.

The U.S. attorney's office says federal immigration agents discovered a Web site with listings of F-14 parts offered by Trujillo and his Ogden business, NSN Specialists. Over several months in 2006 and 2007, agents bought cable assemblies and other F-14 and F-4 jet items from Trujillo.

The men will receive a summons to appear before a federal magistrate. Penalties can carry 10 years in prison and a $1 million (710,000 EUR) fine per count.