An area in eastern Congo that serves as a wildlife habitat for the endangered mountain gorilla was occupied by rebels, imperiling one of the last known populations of the rare animal. 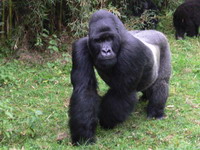 Shelling and heavy gunfire could be heard from the headquarters of the Virunga National Park and rangers were forced to flee over the weekend, said the international conservation group WildlifeDirect.

Only 700 mountain gorillas exist in the world, of which more than half live in the Virunga conservation area, a huge swath of territory at the intersection of Congo, Rwanda and Uganda.

Rebels loyal to warlord Laurent Nkunda have frequently battled over the park in their clashes with the army. Caught in the crossfire are the rare gorillas, 10 of which have been killed this year.

"This is a human conflict that is involving the mountain gorillas. They are not a target, but can so easily get caught in crossfire and shelling," said Emmanuel de Merode, the director of WildlifeDirect.

"We still cannot protect our gorillas. This conflict has no place in the park, least of all in the habitat of these animals. We hope they will be unharmed," said Norbert Mushenzi, director of the southern section of the park for the Congolese Institute for the Conservation of Nature.

The area containing the mountain gorillas was also attacked in January, when two silverbacks were killed. Four months ago, the body of a female gorilla was found. Conservationists say she was killed execution style.

International wildlife groups concerned about the welfare of the gorillas are funding a US$100,000 crisis management program that aims to increase the number of rangers patrolling the wildlife habitat.

"This appalling security situation is making it virtually impossible to implement the emergency program. There is a lot that we need to be doing, and we simply cant," said Lucy Fauveau of the London Zoological Society.

Earlier this month hundreds of people, including rangers and their families, fled the park after fighting broke out. Wildlife groups said huge swaths of the park, including several patrol posts, had been occupied by Nkunda's insurgents and looted.

Since then, Nkunda's forces allowed a handful of rangers back to track the gorillas and they accounted for 18 of the estimated 72 mountain gorillas on the Congo side of the park, WildlifeDirect said.

The most recent outburst of fighting means that the rangers that had returned were also forced to flee, leaving no one to track the rare animals.

Virunga National Park, established in 1925 as Africa's first national park, is located in a lawless swath of eastern Congo that the country's government has struggled to bring under control for years.

Eastern Congo has been gripped by violence involving militias and rebels for more than a decade. Government forces have failed to prevent sporadic outbreaks of violence since the end of the country's four-year war in 2002.