German Chancellor Angela Merkel visited Sunday war-weary Liberia as an indication of Germany's commitment to the future of the African nation. 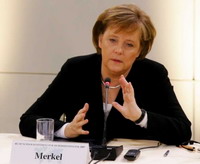 She announced a donation of 300,000 mosquito nets and 4 million EUR(US$5.7 million) in infrastructure aid - offers of help that are "an illustration of our very clear interest in the future of your country and the rebuilding and reconstruction of your country," she said.

Merkel's one-day visit to Liberia marks the end of her three-nation tour of Africa, which began last week with stops in Ethiopia and South Africa.

Liberia's government proudly touted the visit as a sign that the country had gone some way in overcoming the legacy of its violent past.

"We see this as an important recognition of the efforts that have been made by all Liberians to move our country forward," said President Ellen Johnson Sirleaf, who last year became Africa's first elected female head of state.

The effects of war are visible in the ramshackle state of government buildings, most of which were looted during the war and are still missing light fixtures, door frames, windows and furniture. It's also evident in the high rate of child rape, a phenomenon experts blame on former child soldiers - now adult men - who have turned to children, including babies, because they no longer have the guns that helped them overpower women.

Liberia was wracked by more than a decade of on-and-off fighting that ended in 2003 with the ouster of President Charles Taylor, a former warlord. Taylor is now facing war crimes charges at a U.N.-backed court in the Hague.

While in Liberia, Merkel was expected to tour a German-led project where weapons are being transformed into farming tools. She was also expected to tour the country's police academy and meet with women's groups.

Besides the mosquito nets and infrastructure aid, Sirleaf said that the German chancellor has been instrumental in working with other G-8 countries to cancel Liberia's crippling debt.

Fresh from her two-day visit to South Africa, Merkel continued to face questions on Zimbabwe whose deepening political and economic turmoil was a prime topic of discussion in Johannesburg as in Monrovia.

Asked whether Zimbabwe's President Robert Mugabe should be denied an invitation to the European Union's upcoming summit with its counterparts in the African Union, Merkel responded: "It is only appropriate that when issuing invitations, that they are issued to all of the African member countries. ... We can criticize where criticism is due. But we have to issue invitations to each and every one" of the countries in the African Union.

The issue of Zimbabwe is threatening to derail the summit, planned for Dec. 8-9 in Portugal. British Prime Minister Gordon Brown has threatened to boycott the event if Mugabe attends.

Some Liberians said they hoped Merkel's visit would yield results for their nation.

"Liberia's postwar situation needs the attention and assistance of people like the German chancellor. I really hope help will come after her visit," said Oretha Smith, on her way to a Sunday worship service in downtown Monrovia.