Austria to send people looking for better life back to Kosovo

Austrian authorities will deport a family to their native Kosovo, saying they were not asylum seekers but people looking for a better life. 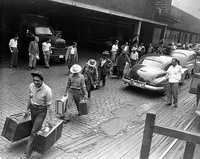 Austria to send people looking for better life back to Kosovo

The deportation of five of the seven Zogaj family members last month has set off protests from sympathetic Austrians drawn to the family's story. One of the daughters, 15-year-old Arigona, eluded authorities and has gone into hiding in Austria.

In a letter and video broadcast on Austrian TV, Arigona threatened to kill herself unless her family was allowed to reunite in Austria. Her mother has been allowed to stay in Austria while Arigona remains missing and, according to media reports, has been hospitalized with a nervous breakdown.

At a news conference Sunday, Interior Ministry officials said the family's applications for asylum had been thoroughly examined but they did not meet the necessary criteria.

"This is about people who want to live better in Austria," said Mathias Vogl, a senior Interior Ministry official dealing with asylum issues.

According to the officials, the family said it paid human traffickers more than 8,000 EUR(US$11,000) to take them to Austria.

"We don't want human traffickers to feel confirmed," Vogl said, adding that it was important not to give other people false hope.

The father entered Austria illegally in May 2001. His family joined him in September 2002 - also illegally - four months after his initial application for asylum was rejected.

Vogl said the Zogaj case had nothing to do with an immigration law that took effect in January 2006 and has been criticized by some as being too harsh.

Andreas Pichler, a ministry liaison officer in Kosovo, said conditions in the family's home village were fine and that there is a school there, as well as a community and youth center. He added that the family had relatives there for support and that a house belonging to the father's brother was vacant.

"The situation in Kosovo is such that building up a life for the family might not be easy, but it's possible and reasonable," Pichler said.

On Saturday, about 500 people demonstrated in support of the Zogaj family in Frankenburg, the Upper Austrian town where the family had lived.