Greece accused neighbor Turkey of a surge in illegal immigration. 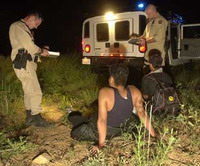 A ministry statement accused Ankara of insufficient border policing and neglecting its obligations under a 2001 bilateral agreement to send illegal immigrants back to the country of entry.

"We have repeatedly brought attention to the insufficient and lacking policing on the Turkish side of the border," ministry spokesman Giorgos Koumoutsakos said.

"This encourages the influx of illegal immigrants, often in ways that endanger their lives."

Greece is a busy transit point for immigrants seeking access to the European Union. Many sneak over Turkey's 200-kilometer (130-mile) border with Greece - parts of which remain mined by Greece's military - or travel from the Turkish mainland to nearby Greek islands in the Aegean Sea.

Illegal immigration is a source of tension between the two NATO allies, which have tried in recent years to improve relations despite long-standing disputes over the divided island of Cyprus and Aegean boundaries.

Turkey's military said Saturday that Greece is causing a "human drama" by forcing illegal immigrants to turn back to Turkey in dangerous conditions.

Koumoutsakos called the accusation "an attempt to distort the reality."

He said nearly 8,000 illegal immigrants had been arrested in Greece in 2005 after crossing from Turkey - a figure that jumped to more than 22,000 last year and to nearly 18,000 in the first eight months of this year.