New Yorkers mourn for woman who died in police custody

Hundreds of mourners were at the funeral of South African-born Carol Anne Gotbaum, who died in police custody at an airport in Phoenix, Arizona. 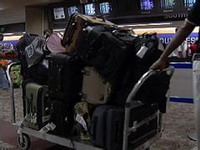 New Yorkers mourn for woman who died in police custody

White lilies adorned the coffin as it was carried out of Congregation Rodeph Sholom on the Upper West Side following the service, which was closed to the media.

"This is a terrible, terrible tragedy," said Queens District Attorney Richard Brown, a family friend who attended the service.

Gotbaum, the stepdaughter-in-law of New York City Public Advocate Betsy Gotbaum, died Sept. 28 at Phoenix's Sky Harbor International Airport. She had been arrested on a disorderly conduct charge after she was kept off a connecting flight that was to bring her to Tucson, where she was to enter an alcohol treatment center.

Authorities have said that Gotbaum, who was handcuffed and shackled to a bench, may have accidentally strangled herself.

The 45-year-old was married to Noah Gotbaum, son of retired labor leader Victor Gotbaum and stepson of Betsy Gotbaum. The couple lived on Manhattan's Upper West Side with their three young children.

"Her husband said that if only one person in that airport had helped her she would be alive today," he said.

Gotbaum's family has hired an attorney to monitor the police investigation into her death, a private investigator who watched the official autopsy and a pathologist who performed a second autopsy.

Carol Gotbaum was born in Cape Town, South Africa, and worked as a department store buyer in London before moving to New York with her husband.