General Pervez Musharraf swept the presidential election in Pakistan on Saturday as unofficial results show. However, the story may take an unexpected turn: the Supreme Court may still disqualify the military leader. 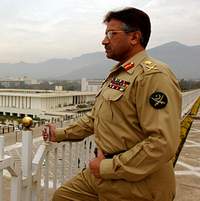 The election by federal and provincial lawmakers was a one-sided affair. Opposition parties abstained or boycotted to protest Musharraf's running for a new five-year term while still army chief.

The Supreme Court ruled Friday that the official results can only be declared after it rules on complaints lodged by Musharraf's opponents that his candidacy is unconstitutional.

Ruling-party lawmakers were claiming victory even before counting began. Only a handful of the government's opponents were among the 685 of the 1,170 eligible lawmakers who turned out to vote.

"Everything about the election was constitutional, legal, moral and legitimate," Niazi told The Associated Press.

But the opposition said the ballot was invalid.

"We will not accept him as president. He flouted the constitution, and he is a person who has hardly any respect for the rule of law," said Sadique ul-Farooq, a leader of the party of exiled former Prime Minister Nawaz Sharif.

Hearings on the petitions challenging Musharraf's candidacy will resume on Oct. 17, meaning if Musharraf wins he will have to wait at least 11 days before knowing whether he can take office.

However, Gordon Johndroe, a spokesman for the White House's National Security Council, was more effusive.

"Pakistan is an important partner and ally to the United States and we congratulate them for today's election," Johndroe said. Washington looked forward to "working with all of Pakistan's leaders" on issues including counterterrorism, he said.

Musharraf has seen his popularity plummet since a failed bid to oust the country's top judge in March, and has promised to give up his powerful army post if he wins the election and restore civilian rule.

He says he wants to stay on to continue policies that have turned around Pakistan's economy despite its position on the front line of the American-led war on terrorism and rising Islamic militancy.

Analysts said the Supreme Court may be reluctant to overturn Musharraf's victoryin the ballot, analysts said.

"Unseating an elected president, who is still in his general's uniform and is a powerful chief of the army staff would be hard to contemplate in a country where the armed forces have traditionally dominated politics and dictated policies," columnist Rahimullah Yousafzai wrote in The News.

It appears likely Musharraf will form an alliance with exiled Prime Minister Benazir Bhutto after parliamentary elections due by January. On Friday, he signed into law an amnesty quashing corruption charges against her and other politicians.

Bhutto's party abstained from Saturday's voting but did not resign from Parliament as other opposition factions did over Musharraf's candidacy, that has also angered civil society activists.

Chanting slogans against Musharraf, dozens of lawyers clashed with police outside the provincial assembly in the northwestern city of Peshawar. They burned an armored police vehicle, threw rocks at officers, and burned an effigy of Musharraf before police swinging batons dispersed them.

Three lawyers and a policeman were injured in the clash, witnesses said.

"This is just a drama, not an election," said Zafar Iqbal, 28, a shop owner in the eastern city of Multan.

In Quetta, school teacher Ali Ahmad said he had no interest in the vote.

"All politicians are the same whether it is Nawaz Sharif, Benazir or Musharraf. They are the enemy of poor people."

The complete unofficial results were announced just 80 minutes after the five hours of voting - broadcast on national television - was done, although Ahmed's polling agent said the ballot boxes should have been sealed and the count undertaken after the court verdict.

Chief Election Commissioner Qazi Muhammad Farooq announced that Musharraf had won 252 of the 257 votes cast in the federal Parliament, with three ballots judged invalid and two votes going to Ahmad.

Musharraf won unanimously in Baluchistan province with 33 votes, and polled 31 of the 34 ballots cast in North West Frontier Province. In Punjab, Musharraf won 253 of the 257 votes cast, and in Sindh, won 102 of the 104 votes.

Afterward, dozens of vehicles packed with supporters of a pro-Musharraf party paraded past the Parliament building, honking horns, waving colorful party flags, and holding up two fingers in a sign of victory.

"We don't want the world to think this is a nation without conscience," said Asma Jehangir, chairperson of the nongovernment Human Rights Commission of Pakistan. "There are people who would not want military rule."