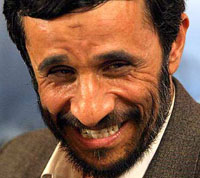 President Mahmoud Ahmadinejad said Israel's continued existence was an "insult to human dignity," as millions of Iranians gathered Friday to support the Palestinians.

"The creation, continued existence and unlimited (Western) support for this regime is an insult to human dignity," Ahmadinejad said. "The occupation of Palestine is not limited to one land. The Zionist issue is now a global issue."

The demonstrations for "Al-Quds Day" - Al-Quds is the Arabic name for Jerusalem - also spilled over into anti-American protests because of U.S. support for Israel.

In the capital Tehran, hundreds of thousands of people poured into the streets as they chanted "Death to America" and "Death to Israel." Some protesters also burned American and Israeli flags.

State television reported similar large rallies in all other provincial capitals and smaller towns across Iran.

Iran does not recognize Israel and regards Palestine as comprising the Jewish state as well as the West Bank and Gaza.

Ahmadinejad is known for his Israel-lashing comments who has called for Israel to be "wiped off the map." He has also called the Nazi Holocaust a "myth" used as a pretext for carving out a Jewish state in the heart of the Muslim world after the World War II.

The Iranian president once again said Palestinians should not pay any price because Europeans committed crimes against Jews in World War II. He said they could give a part of their own land in Europe or Alaska so that the Jews can establish their country.

"I ask European governments supporting Zionists and the American people that will you allow occupation of part of your land under a pretext and then talk about a two-state solution?," Ahmadinejad said after the rallies.

Ahmadinejad said a "free referendum" was the solution to the Palestinian issue, saying Jews, Muslims and Christians as well as five million Palestinian refugees should take part in a vote to determine their own fate.

Parliamentary speaker Gholam Ali Haddad Adel said the Israeli occupation of Palestinian lands was a "blatant oppression" and warned that the relationship between the Islamic world and the West won't improve as long as Palestinians are not allowed to determine their fate in a referendum.

Since the Islamic revolution in 1979, Iran has observed the last Friday of the Islamic holy month of Ramadan as "Al-Quds Day," as a way of expressing support to the Palestinians and emphasizing the importance of Jerusalem to Muslims.

Jerusalem is the third holiest city in Islam after the Saudi Arabian cities of Mecca and Medina.