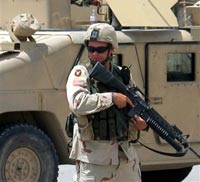 The troops were targeting the commander of a rogue militia group believed to be associated with the Quds Force, a branch of the Iranian Revolutionary Guards, the U.S. military said.

Gunmen opened fire on the soldiers with assault rifles, rocket-propelled grenades, and at least one man was carrying what appeared to be an anti-aircraft weapon, the military said. Ground forces called for air support when the fighters kept coming toward them and the military said 25 militants were killed and two buildings destroyed in airstrikes.

The military said the targeted commander was responsible for moving weapons from Iran into Baghdad.

The military also reported the death of a U.S. soldier, killed by small arms fire during operations Thursday in a southern section of the Iraqi capital. The section of the city is used by al-Qaida cells as a support zone, the military said.

In the pre-dawn raid Friday, U.S. aircraft repeatedly bombed the neighborhood in Khalis, a Shiite enclave about 80 kilometers (50 miles) north of Baghdad, according to an Iraqi army official who spoke on condition of anonymity because he was not authorized to release the information. At least 24 were killed, 28 were injured, most of whom were in critical condition, and several others were missing, he said.

He said civilians were killed when they rushed out to help those hurt in the initial bombing.

The U.S. military said it had no reports that any Iraqi civilians were killed as a result of the Friday operation.