Appeal to morals today all that Khodorkovsky have left 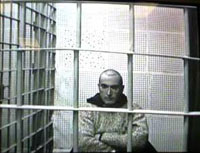 Appeal to morals today all that Khodorkovsky have left

A massive by Khodorkovsky sent from his Siberian jail cell said that Russians had to leave according their highest morals.

"An appeal to morals today is all that we have left," Khodorkovsky wrote in the open letter posted on the Web site of the All-Russia Civil Congress, a rights group.

Khodorkovsky is serving an eight-year prison sentence after being convicted of tax evasion and fraud in a trial seen by his supporters as punishment for his attempt to mount a political and economic challenge to President Vladimir Putin. His Yukos oil company, once Russia's largest, has been taken over by the state.

His open letter, which was dated Monday but only drew attention Thursday, was his first in more than two years.

It was directed at Russia's liberals, but contained his prescription for Russian society as a whole.

"Only by convincing people that they, deep in their soul, do not simply want to live in good conscience but cannot be happy living otherwise, will it be possible to lay the foundation for building a democratic, law-abiding state, our Russia," the letter said.

Khodorkovsky was ruthless in consolidating his control over Yukos in the rough privatizations of the 1990s, when Russia's prime resources were parceled out to the politically connected businessmen who became known as the oligarchs.

Once he had consolidated his control, he was among the first in Russia to push for Western-style business practices. He also began to support political parties that opposed Putin's policies and created a foundation to help strengthen civil society in Russia.

"He has stopped being a businessman not only in practice, but in his thoughts," Lyudmila Alexeyeva, one of Russia's most respected human rights advocates, said Thursday on Ekho Moskvy radio. She said the transformation occurred even before his arrest in October 2003.

"The ordeal he went through has contributed to these reflections. This is a traditional path for people living a difficult life," Alexeyeva said. "This is a very true path, and it's a pity that very few businessmen or politicians take it."

In his last missive from prison, issued in August 2005, shortly after his conviction, Khodorkovsky had warned of a growing sense of social injustice over post-Soviet reforms that had enriched a few and plunged the majority of Russians into poverty.

In this week's letter, Khodorkovsky referred several times to the need for faith. He said morals were the strongest and most important argument against the presence of hundreds of thousands of homeless children and the lack of medicines in a country with a budget surplus.

Morals also were the only argument "against terror and revolution as a means of solving political problems and against the shutting up of all sorts of dissenters," he wrote.

In 2005, Khodorkovsky had called for liberals to create a broad "social-democratic" coalition with communists and nationalists to oppose the Kremlin.

Such a coalition, called the Other Russia, was formed in 2006. It has held a series of street protests called dissenters' marches, some of which have been violently dispersed by police, but has not succeeded in uniting Russia's squabbling liberals or in attracting communists.

On Sunday, the Other Russia chose former world chess champion Garry Kasparov to be its candidate in the March presidential election. Even if he were to be allowed to run, which is unlikely, he would have little hope of posing a significant challenge to the Kremlin's chosen candidate.