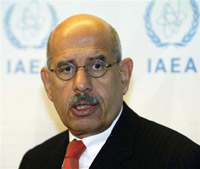 ElBaradei has come under sharp U.S. criticism over moves that Washington sees as appeasing Iran - particularly a deal he negotiated for Tehran to explain outstanding questions over its nuclear program.

He defended the strategy in an interview with the state-run Egyptian daily Al-Ahram as a test for Iran to "show good intentions."

"This situation, which might continue for two or three months, is an investment in peace," said ElBaradei, an Egyptian, who heads the International Atomic Energy Agency.

He warned that the standoff between the West and Iran over the nuclear issue was adding "more fuel to a burning fire" in the Middle East. "The area is going through one of its worst moments and we cannot add more confrontations."

"In my opinion what we should do now is to encourage Iran to cooperate because any attempt to isolate Iran ... means the hard-liners will take over the driving seat," he said.

"Today, no one talks about Iran having a nuclear weapon. Even Western intelligence agencies say that Iran has the intention but needs three to eight years to get this weapon," he said.

The United States and its allies accuse Iran of secretly trying to develop a nuclear warhead, while Tehran insists its nuclear program is aimed only at generating electricity. Iran has refused U.N. demands that it suspend uranium enrichment, a key process that can be used in developing a bomb or the fuel for a reactor.

The United States has pushed ElBaradei to focus on the enrichment suspension. But in July, he reached a deal with Iran for it to explain a series of issues that have raised suspicions over its program and clear its record by year's end.

Washington accused the IAEA chief of overstepping his authority, though it later endorsed the deal - while underlining it does not clear Iran of the need to suspend enrichment. Elbaradei denies he is freelancing.

Six key nations and the European Union agreed last week to delay until November a new U.N. resolution that would toughen sanctions against Iran, waiting to see if Tehran answers questions about its disputed nuclear program. The U.N. has twice imposed limited sanctions on Iran for the refusal to suspend enrichment.