The leaders of North and South Korea signed a wide-ranging reconciliation pact Thursday pledging to finally seek a peace treaty to replace the 54-year-old cease-fire that ended the Korean War. 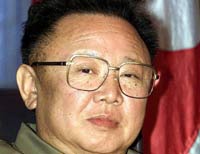 North Korean leader Kim Jong Il and South Korean President Roh Moo-hyun signed the agreement after three days of summit meetings in Pyongyang, only the second-ever such meeting between the countries.

The two Koreas "agreed to closely cooperate to end military hostility and ensure peace and easing of tension on the Korean peninsula," according to their agreement.

Substantive progress on any peace treaty would require the participation of the U.S. and China, which also fought in the conflict. South Korea never signed the 1953 armistice ending the war.

After both leaders signed the agreement, they shook hands and posed for cameras. Roh then took Kim's right hand in his left and raised both their arms in the air like champion prizefighters before the two shared a champagne toast.

The two countries also said they would hold "frequent" summits, although no timing for any future such encounters was given. Instead, the Koreas scheduled meetings between their defense and prime ministers in the coming months to build on progress from this week's summit.

In their agreement, the North and South also pledged to boost economic ties between the longtime foes, open regular cargo railway service along restored tracks crossing their heavily armed border and create a joint fishing zone on their disputed sea frontier.

They will also open an air corridor between Seoul and North Korea's tallest peak, Mount Paektu, a sacred site to all Koreans that is the origin for the nation in its creation myth.

In an issue deeply emotional to many aging Koreas, the sides also agreed to increase reunions between relatives separated by the border and hold such meetings "constantly." Since the first summit between the Koreas in June 2000, some 18,000 Koreans from separated families have met through face-to-face or video reunions.

Also Thursday, the North and South agreed that a joint cheering squad for the Koreas would travel to next year's Beijing Olympics via train. The countries have sought to field a joint team at international sporting events, but have differed over how athletes would be chosen.