A new brand of cocaine labeled with the British flag is coming out of Colombia. 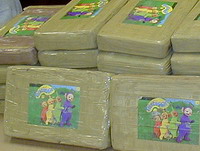 The navy commander for the Caribbean coast said the labels apparently were chosen arbitrarily to indicate which lab produced the cocaine - and have nothing to do with Britain.

"This is the logo that is attached to each shipment to show in which cocaine laboratory the drugs were produced," Garcia said. "Sometimes it's a horse or a cat or a country's flag like we found this time."

Using the laboratory's markings, the navy is trying to determine who is the producer. The driver of the truck was arrested.

Authorities said the cocaine was bound for Mexico and the United States.