The Department of Energy suggested four contracts to study the feasibility of using recycled nuclear power plant fuel in a new breed of reactors. 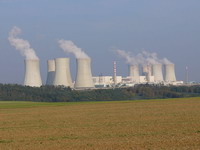 The largest contract, for $5.6 million (4 million EUR), was awarded Monday to Bethesda-based International Nuclear Recycling Alliance, which is led by French state-owned nuclear power plant supplier AREVA and Mitsubishi Heavy Industries, Ltd. Areva is building reactors in the United States with Constellation Energy, the parent of Baltimore Gas & Electric and the operator of the Calvert Cliffs nuclear power plant.

INRA will complete three studies by 2008 detailing the technologies needed, designs for a recycling center and recycling reactor, and business plans for nuclear fuel recycling and reuse. If the DOE decides the technology is feasible, a plant could be operational as early as 2020, said Laurence Pernot, an AREVA spokeswoman.

Prior studies have shown that recycling spent nuclear fuel not only reduces the amount of fuel heading to nuclear waste facilities, but can provide power profitably, Pernot said.

The contracts were awarded under the Global Nuclear Energy Partnership. Under the partnership, a limited number of countries including the U.S. and Russia would provide uranium fuel to other nations for powering reactors to generate electricity, and then retrieve the fuel for reprocessing. This would deprive those nations of their own nuclear fuel enrichment programs, which can be used to make atomic arms.

Critics of the initiative say resuming recycling, a process the U.S. abandoned in the 1970s over proliferation concerns, can make it easier for terrorists or enemy states to obtain weapons-usable plutonium. While the program envisions reprocessing through a technique where pure plutonium is not separated, that technology is commonly said to be decades away.

In June, the Union of Concerned Scientists said it continues to oppose GNEP, saying it does not believe the technologies proposed for development would be proliferation-resistant. The end result will be an increase in the "risk of diversion or theft of weapon-usable materials and an associated risk of nuclear terrorism," the group said in a letter to the Department of Energy.

Eleven U.S. sites have been selected as possible places to reprocess spent nuclear fuel from reactors.