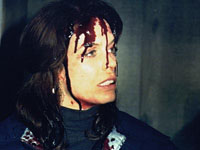 Health officials said Wednesday that a miner who had guided scientists to a mine believed to be the source of an Ebola-like outbreak had contracted the disease.

Ministry of Health spokesman Paul Kagwa urged the public to remain calm following the emergence of a new case two months after the outbreak was declared contained, and cautioned miners to avoid re-entering the mine. Guards were posted at entrances to the mine, which has been closed since June, he said.

The Marburg virus, a rare hemorrhagic illness, killed a gold miner in Kitaka, around 180 kilometers (about 100 miles) west of the country's capital, Kampala. Another 29-year-old miner died of the illness at the same mine in June.

The latest victim, now being treated in an isolation ward near the mine, "was guiding a team of scientists who were taking samples from bats in the gold mine," Kagwa told the Associated Press.

According to the World Health Organization, the patient was wearing complete head to toe protective equipment when he helped international scientists investigate the source of the Marburg outbreak in the mine.

"We think that he must have sneaked back into the mine without wearing his protective clothing," Kagwa said.

Gregory Hartl, a WHO spokesman, said the victim's "prognosis is as good as can be expected for Marburg. Hartl said that the patient developed symptoms on September 17, and now appears to have a healthy supply of antibodies.

Since Marburg was first identified in miners at the site in June, only virus hunters swathed in protective gear are supposed to have entered the mine in search of the bats they believe may have been the source of the outbreak.

"The analysis team have completed their ecological studies and we are now awaiting the results from the samples they took," Kagwa said.

Marburg has a death rate that can be higher than 90 percent and no treatment or vaccine. The disease can cause headaches, nausea, diarrhea and vomiting. In severe cases, the central nervous system is attacked, and patients may bleed from the eyes, ears and elsewhere.

Since Marburg was first identified in 1967, large outbreaks have been reported in Congo, Angola and elsewhere.

Scientists are not sure how it is transmitted to humans, but believe people may become infected by being bitten by bats or by insects or other animals that have been infected by bats. Another possibility is that people catch it by breathing in air carrying virus particles from bat feces.