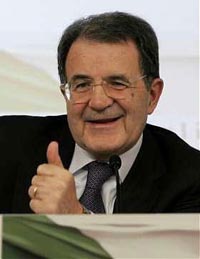 Before any further sanctions against Iran are considered, a window of opportunity that agreement between the Islamic state and the U.N. nuclear agency has opened must be explored, Italian Premier Romano Prodi said Wednesday.

"We must take advantage of this window," Prodi told the Foreign Press Association.

The International Atomic Energy Agency wrested a promise from Tehran in July to clear up its nuclear record. Last month, the agency's chief, Mohamed ElBaradei, urged Iran to answer all questions - including reported experiments that link enrichment and missile technology - before the end of the year.

But the cooperation agreement has raised concerns, including in Washington, that Iran is using it as a smoke screen to divert attention from its defiance of the U.N. Security Council and make any attempts for new sanctions more difficult.

"We have always said that sanctions are an instrument to push toward dialogue," Prodi said. "I don't think that stiffening them before sitting at the negotiating table is the most accurate choice."

"We wanted to open negotiations, now negotiations are open. Let's work so that they can produce results," said the premier, whose country is Iran's No. 1 trading partner in Europe.